Stone lion is carved out of stone, which is the common ornament in Chinese traditional architecture, such as imperial palace, temple, Buddha pagoda, bridge, mausoleum, mansion, gardens and so on. Lion indicates safety and luck in China. There is a rite to stone lion called Kaiguan, which means give light to the stone lion’s eyes. If the stone lion didn’t receive the rite, it’s only an artwork not a mascot in Chinese minds. The paired stone lions should stand symmetrically in front of the building. The male stone lion stands at the left hand, and the female stone lion should stand at the right hand. 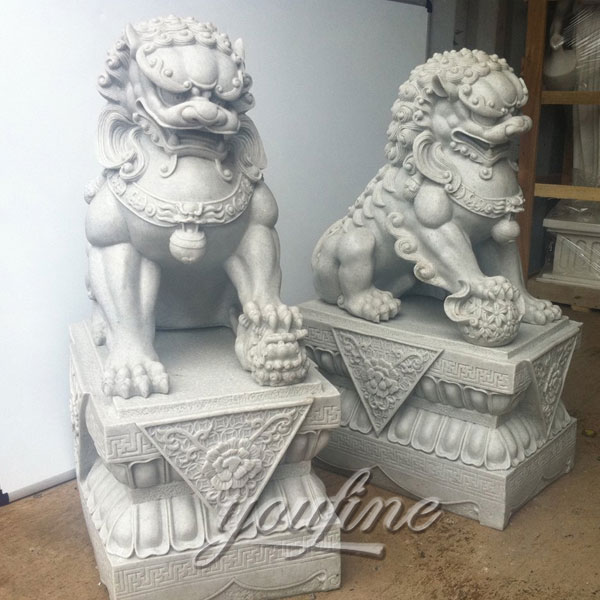 Generally, stone lion refers to the paired lions outside the gate; however, their appearances turn out to be the lions we are not familiar with. Maybe the most people in central plains of ancient China had never seen the real lion. There is another saying that the lions of ancient Western Region are distinctive from the ones of Africa.

It is said that the lion was introduced into China in Han Dynasty (206B.C. -220 A .D.) from the Western Region. In Chinese culture, lion is a mythical figure rather than real animal. Together with Kylin, lion is regarded as the divine beast. After its introduction, lion gradually became the mascot outside the gate, for Chinese people think that lion can drive away the evil spirits.

The appearances of different dynasties stones lions are distinctive. The ones of Han and Tang Dynasties are strong and intrepid; the thin but powerful ones are from Yuan Dynasty. As to the stone lions of Ming and Qing Dynasties, they appeared more meek and gentle. Besides, stone lions have the obvious local features. As a whole, the lions from the northern China are more decent and simple-carved, while the lions from the South are more vivid and alive with many matching accessory sculptures. The stone lion usually is carved based on Xumizuo, a kind of architectural ornament frequently used as the base for decent building or carving. Most of lions have curly hairs. 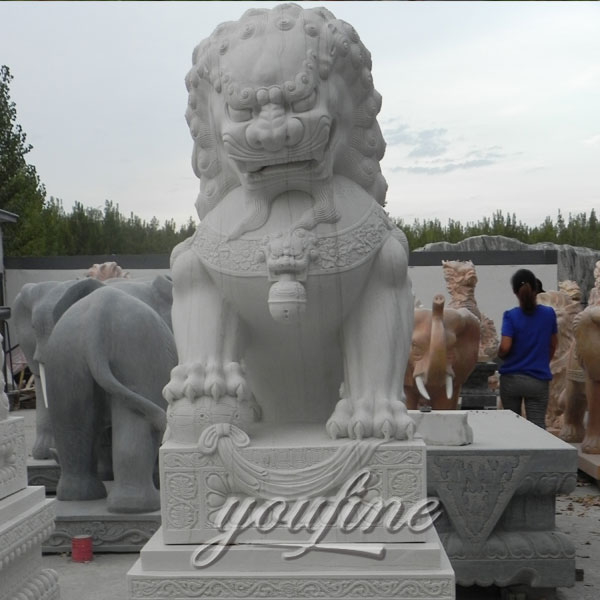 Related to Yin and Yang Philosophy

The location of the stone lion is settled in China. Generally, it should be a pair of lions with female in the right hand side and male the left according to Chinese traditional Yin and Yang philosophy. The female lion is usually carved to have a child lion between her paws, while the male lion is playing a ball with one paw. When people enter the building, the male lion should be at the left hand side and the female at the right.

However, there are the exceptions, such as the stone lions outside the Temple of Guan Yu in Jiayu Pass and the stone lions standing in front of the Confucian Temple in Qufu, Shandong Province. One can see the famous stone lions before the Tian’anmen Rostrum, the Altar of Land and Grain in Zhongshan Park and Peking University as well as Lugou Bridge in Beijing.

Why are they called Foo dogs?

Foo dogs may refer to the Chinese word Fó referring to Buddha or Fu which means blessing and prosperity. Fu is a very auspicious word in Chinese.

It seems some thought these stone lions resembled the Chow Chow dogs and started calling them dogs instead of lions. That really caught on and they are widely known as Foo dogs or Fu dogs.

Foo dogs should always be displayed in pairs. You need one male and one female Foo dog. This has to do with harmony and completeness.

This is to keep balance; the Yin and Yang. The female and male complement each other.

Always keep the two together. Never place them in separate rooms.

I have found the placement of the male and female is not an absolute rule. In so many places opposite placements occur. Quite often you will find the male on the left when standing outside looking towards the building.

The conclusion must be that the placement is not of utter importance. The important thing is to always have a male and a female working together for complete protection. 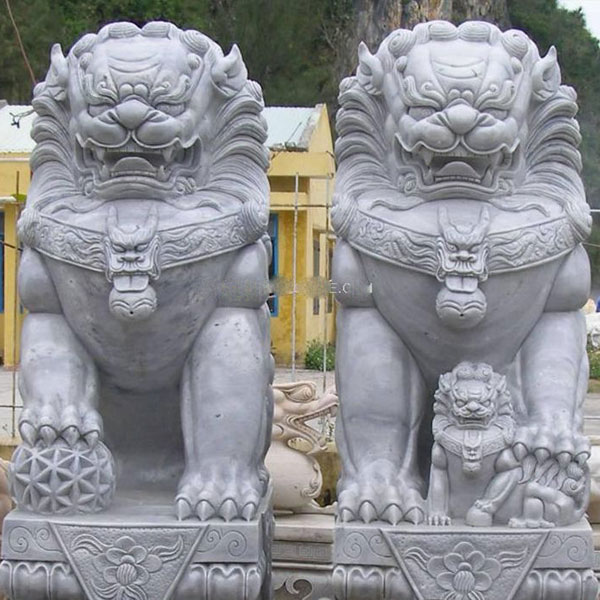 The male Foo dog can be recognized as the one resting his paw on the ball which may represent the world.

The male is Yang. He protects everything outside.

He is protector of the building itself.

He is power and supremacy.

Inquiry For More Information!Send Email To E-mail:sales@you-fine.com.Your email will be secreted totally,pls feel free to leave your email.